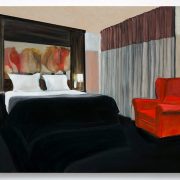 The concept for The Meeting came about as a result of the ever-popular Speed Curating event organised annually by Visual Artists Ireland. Held in the magnificent grounds of the Irish Museum of Modern Art, artists and curators gather together to partake in what has been coined ‘speed dating for artists’. This is a fun and lively day where artists are allocated a fifteen- minute session to meet with individual curators in order to pitch their ideas and present their work before moving on and another artist taking their seat. This event has been lauded as a wonderful opportunity for artists and curators alike to network and meet with individuals within the art world whom they may not necessarily have had the opportunity to cross paths with otherwise. As such this event acts as a fertile creative platform which results in artists and curators often going on to form new partnerships. No more so than in the case of the Olivier Cornet Gallery itself where, in addition to the group of established artists they represent, the gallery also works with another group of artists: The Associate Gallery Artists (or AGA) are artists that Olivier has met or engaged with through the Speed Curating events held both in IMMA and Belfast.

The nucleus of the idea for ‘The Meeting’ began at the most recent Speed Curating event held at IMMA with the actual meeting of County Laois Arts Officer Muireann Ní Conaill and Olivier Cornet at the event where the idea for the joint exhibition was born. Olivier invited David Fox and Vicky Smith to come on board while Muireann invited Darina Meagher and Aileen Hamilton to participate. This curated group exhibition opened in early July in Laois Arthouse in Stradbally Co. Laois before taking its home here at The Olivier Cornet Gallery on Denmark Street in Dublin.

This sense of anxiety can be found in the work of Darina Meagher whose paintings on view in this exhibition, a series of images depicting empty hotel rooms, are again devoid of human life. With an Honours B. Des and an MA in Visual Communications, Meagher began her career in the area of design and visual communication before moving into the area of contemporary painting and gaining a BA (Hons.) in Visual Arts Practice at the Institute of Art, Design and Technology, Dun Laoghaire in 2011 and more recently a Masters in Fine Art Painting at the National College of Art and Design, Dublin. Winner of the Peter O’Kane Solo Exhibition award at the RDS Student Awards 2011, Meagher went on to complete a much sought after three-month studio residency at the RHA in 2015 and is also the recipient of a one-month residency at Arthouse, Stradbally, Co. Laois which was awarded at the Dunamaise Arts Centre Open Submissions Exhibition in 2016. Meagher joined the New Art Studios in Dublin in 2015 and has exhibited extensively. Meagher’s work to date has been concerned with various transitory spaces. To date her focus has been on the theme of ‘waiting rooms’   in various guises be it in a hospital setting where one waits nervously for a consultation, a diagnosis or a consultation or in the limbo spaces of waiting rooms at airport, bus or port terminals where again we wait anxiously for planes, buses or boats. She has looked too at the commercial space. From the escalators of shopping malls to airport check-in areas, Meagher has explored the empty promise of consumerism. Like Fox, each of Meagher’s paintings depict public spaces that are devoid of human life, soulless and empty; images that are unsettling and unnerving. Meagher’s more recent work, featured here as part of this exhibition, has taken a turn. Here Meagher moves the focus away from public spaces of limbo to the semi-private space of the hotel room. Meagher was interested in the idea of ‘Panopticon’, the all-seeing, and, using the tool of Google as a starting point, searched for a hotel room in each of the top ten cities of the world. The three pieces chosen for this exhibition include; ‘Hotel Room Beijing’; ‘Hotel Room San Francisco’; ‘Hotel Room Christchurch’. In these works, Meagher reflects upon the experience of the transitory space. There is no permanence or genuine comfort to these spaces. The individual simply passes through and their departure signals the arrival of another anonymous guest. The hotel room is another limbo space, a state of pretence where one is made to feel ‘at home’ where, in fact, the opposite is true. The uniformity of these anonymous, sterile spaces provokes an intense feeling of claustrophobia. Many of the hotel rooms lack windows or have windows that are hidden from sight, creating a sense of entrapment and the lack of any human presence in all of these images is disturbingly bleak. With this work Meagher reflects the anxiety, loneliness and transience of modern day existence and by depicting a series of hotel rooms from cities all around the world, the artist suggests that this is indeed a universal condition.

The Meeting runs until 3rd September at the Olivier Cornet Gallery.